Ambitia was a part of the summer youth exchange called Update Your Status: Nature - Connected, which happened in town Bergolo in Italy. There was 42 young people from 7 countries: Netherlands, Italy, Spain, Croatia, Czech Republic, Poland and Slovenia. The project was aiming to provide young people an opportunity to have a rich intercultural learning experience that also significantly enhanced their environmental and nature awareness and knowledge to act upon. They used a range of different methods, tools and techniques of non-formal learning to allow young people experience nature, enhance and acknowledge their connection to nature, actively address current environmental issues and review current solutions, as well as develop new products (messages) for raising environmental awareness…

It is an undisputable fact that just upon hearing the words ‘education’, ‘learning’, and ‘work’, there pop dreadful images of torture in one’s head. We were thinking about replacing that word with its synonym that carries less of a negative connotation… Still, we are rather sure you would all agree that ‘torture’ is a perfect fit. A learning process is primarily linked to being engrossed in reading overwhelming and sometimes even essence-lacking information from an infinite number of resources. Luckily, we were given an extraordinary opportunity to experience and be immersed in a type of a non-formal education, where learning outcomes were, often indirectly and without us being fully aware of it, attained through a variety of fun activities. Being a part of The youth Exchange programme 'Update Your Status: Nature-Connected', that was organized by Anatta Foundation and co-funded by Erasmus+ Programme and which included 42 people from seven countries. So the young people from Italy, the Netherlands, Slovenia, Croatia, Poland, the Czech Republic and Spain were all brought together to beautiful and green Italian village named Bergolo. Knowing that it is not an easy task to keep young people’s attention and maintain their interest high throughout one whole week, the project masterminds have attempted (and succeeded) in constructing a schedule filled with different tasks that could give us enough freedom to express our opinions, to debate, stand up for a certain point, explain our attitudes towards relevant ecological issues on a global level, and even make us understand that some of our viewpoints need to be altered due to a new flow of information we have neglected or were unaware of.

One thing that caught our eyes was how tasks ranged from a very simple ones - such as, name and warm-up games or even entertaining ones such as musical chairs, guessing games, or dancing games, which sometimes included a lot of movement and were a good implementation of the total physical response learning methodology, to a more complex ones, such as creating positive environmental messages, the role-play in which we were to become characters with strong beliefs and attitudes that would sometimes be in alliance with our own but that could also be diametrically opposite, contemplating on traits and virtues that we value the most and the reasons behind it, etc. We see that as a very clever approach to education, giving people enough time to contribute but also recharge their batteries when they needed to do so. We will try to provide a commentary on most activities consecutively, emphasizing relevance and outcomes of each. 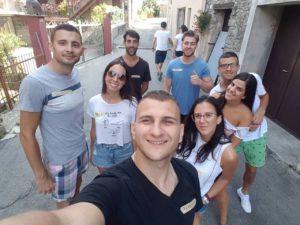 On day 1, we were introduced to 8 Key Competencies, which was interesting, because it made us question our own skills and abilities and made us wonder which competencies we have developed through our life and which competencies we might have not acquired yet but need to work on. It also emphasized the importance, practicality and benefits of non-formal education. We were asked to (anonymously) write down our needs, fears, expectations and contribution to the project, which was nice, because it gave us a chance to open, share things we usually don’t and potentially realize that we had way more in common than we initially believed.

Day 2 was a super fun one, with a lot of movement, action, laughter, and a small dose of competitiveness. It started with groups having to adopt a certain understanding of the world and behave correspondingly. For some people, their roles seemed quite natural because they agreed with some of the tenets, while some might have felt a bit out of place. One of the aims was to open yourself to learning about different cultures, respecting their ideas and motives, but also understanding that there is no such a thing as a pure culture, each one is an admixture of similar or even clashing beliefs. (P.S. The best one was the culture in which a man claims a woman knows it all, logically – ‘’My woman thought me everything I know’’, said man.). Then, we all had a few moments of silence, to breathe in the air around us, to appreciate the beauty around us, to try to feel the forest’s spirit and find an object/an animal that we felt any kind of connections towards. Lastly, we took part in a rally, which was one of the best activities, because we could be all over the place. All the tasks in the rally called for creativity, a bit of knowledge, inspiration, a bit of sweat, a bit of running, a lot of cheering team spirit and some acrobatics! Let us not start on those super creative surviving in the nature videos. Pure comedy! Pure art! 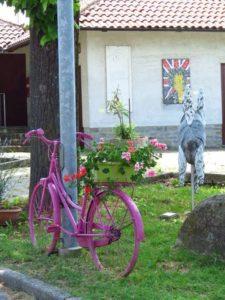 Bio-mimicry on day 3 was quite intriguing, because we managed to blend something that seemingly made no sense together into something practical and useful. We were given a problem to solve by being in a role of animal, which enabled us to realize that other planet inhabitants are to be given the same amount of respect as any human because they are also given the ability to think, create and find solutions. The workshop ‘Nature in Our Collective Past’ was one of the most educational ones, where we got to enjoy the rich heritage of every country, where we were introduced to witty and interesting facts, myths, legends, fairytales. It was really mind blowing to see how much we all have in common, how certain nature elements are present through all or most cultures, how some cultures give an advantage to certain nature aspects and how the nature’s relevance and impact has been acknowledged, respected and even feared since ever. It was interesting to see how there are developed similar stories based on nature and nature elements in different countries and between different nations.

On day 4 we had a heated debate on our opinions on global environmental issue, and that is when individual attitudes really came to the surface, where even in the same culture group, there were people standing on both sides of the continuum. A simple question would turn into a clash of numerous argumentative speeches. Afterwards, each delegation presented the biggest environmental issues they are coming across in their countries. Unfortunately, the biggest problem seemed to be lack of awareness. Some countries seemed to have commenced some projects to solve the existing problems, while some countries have turned to producing in nature, which would result in a smaller amount of waste. Still, most of the problems are still sitting on top of our heads, waiting for us to go and do something about them or urge others to do so. Then we all had a free afternoon. Some of us went to hike and enjoy the nature while some of us went to check how salty the sea was ;). You are curious to know, aren’t you? 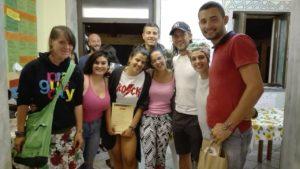 On day 5 we were introduced to the concept of Zero Waste and were astounded by amazing results some of the people dedicated to it have achieved. We also watched a presentation on DIY and all its benefits (financial too!) and then were given some space to test our own creativity while making useful and practical things from already used items or basically whatever we grabbed! It really sparked everyone’s interests and all of us enjoyed testing ourselves. And then…barbecue! No words needed here to describe it, thatwould only ruin its beauty. On the sixth day, we had an unusual activity of trying to understand trees. Imagining their emotions, thinking about their life, explaining their physical appearance…a beautiful way to connect ourselves to the nature on a deeper, if not a spiritual level. Then we learned about how different values impact our lives, we discussed why we give priorities to some of them, why we live a life in correspondence to them, etc. Then we wrote a letter to ourselves. Keeping those, for sure! If nothing, then for a good laugh in the future J. It was quite intimate but at the same time something worth sharing in a collective.

One of the most creative tasks was creating environmental messages that will be shared with the world. Some of us made pictures, some made videos, some created a comic… a variety of approaches but with the same dream. 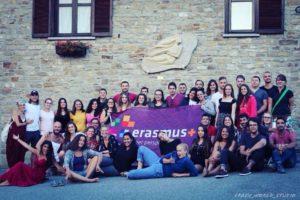 Don’t you dare thinking that we have forgotten to mention all those amazing national dishes, though! In a nutshell, it has been a delight being a part of this project. Having an opportunity to meet all those young people with brilliant ideas and even more brilliant minds is something we will always cherish and have a fond memory of.  We are very grateful for the fact that we were all considered to be equals, were given the same amount of respect and a huge amount of love!