Culinary Adventure
If you are in need for creative and funny team building for your regular staff that doesn't include external help, search no more. I prepared this activity for the team of my former co-workers few years ago and it is still one of their favourite activities. This team building was created with the inspiration of the many cook shows I love to watch.

Why just staff and not necessarily recommended for the project participants? Because it is a bit brutal and you need to know your people before you do it. I was a manager of my team for four years and I was still a bit nervous when I introduced the rules.

I told them to meet me at 23.30 in the evening, because our exercise will start at midnight, so it gives me just 30 minutes to explain the rules and for them to prepare, if needed. There were fourteen people in the group.

These are the rules I repeated twice:

I gave the group two recipes and all necessary ingredients plus some extra decorations. I also provided them with all equipment and utensils. I wanted them to succeed. There were no second agenda behind the exercise.

I was expecting revolt, because not everyone wants to make cake in the middle of the night, but trust me there are always some people competitive enough to make a crazy start, rearrange people according to their cooking skills and capability of staying up at weird hours. And this exercise brought the best from these people.

I observed their work dynamic. There were people who lead and stayed up all night to check on the progress of the team, but there is also always a group of followers which are good with following instructions but don’t have sense for delegation. Some people made a great reason for a enjoying each other’s company all night and just cheered others while working. It was really a great and entertaining activity we all enjoyed.

You ask what the purpose of this exercise was, besides the team building. Exercise was a relay which means that the task of the first person affected the task and performance of the next one. I wanted the team to understand correlation and dependence in the organisation. Organisation seems strong to people outside, but could be very fragile if we don’t communicate properly. I noticed for instance, that some people liked playing solo actions from time to time in our regular work or didn't communicate properly with others and that affected the entire team. Forcing them to have five minutes between to communicate, gave them opportunity to speak to each other and to delegate more clearly as they should be doing in their regular communication.

For sure this exercise was also an out of the comfort zone activity for most men on the team, having no serious baking experiences. Youth work sometime turns into theoretical debated and mentoring, asking questions and supporting other people’s ideas. And as a youth workers, we kind of miss our own visible results at the end of the project. This time, there was no philosophical debate, no politics and no hard talk, just a sheer and pure creation and visible results at the end, which is so often not seen in youth work.

The night activity also gave the special pressure because youth work is not a 9 to 5 activity. The cake was not a masterpiece but it was the best cake I’ve ever had because we made it together and it made me very proud of the team and also how they managed to have fun through the exercise.

Have fun making the cake from scratch. I’m really wondering how it works out for you. 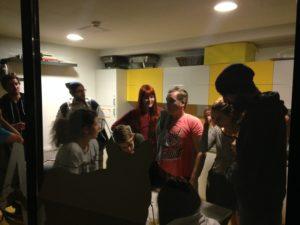 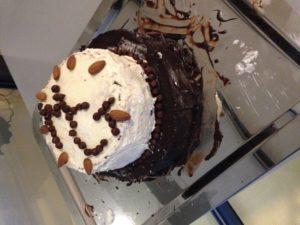